The Examiner's Report for Pre-Exam 2015 was just put online: here.
Update - 3 June 2015: an addendum has been published to the Examiners Report 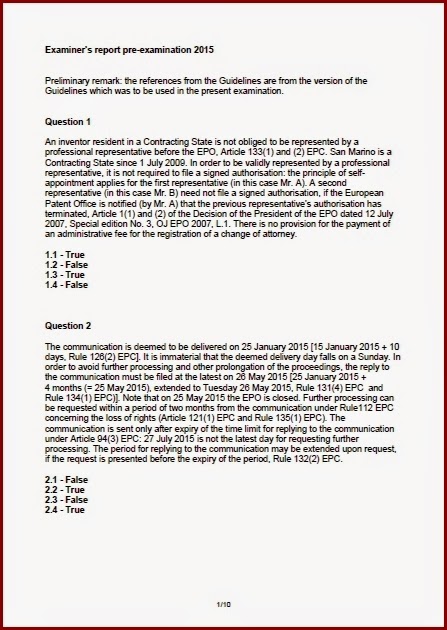 The official answers (and where we deviated in our provisional answers - see below) are:

As to 20.2, the Examiner's report indicates:
So, our (provisional) legal answers and our (provisional) claims analysis answers would have attracted all 50 marks from the legal part, and -with 3 isolated errors- 44 marks from the claims analysis part, so a total of 94. Further, for 20.2, both T and F were considered correct, which "saved us" as we deviate for 20.2 from the originally expected answer (F).

The different answers to 15.2 and 17.3 relate to-what is referred to in the discussion to our claims blog- as the "cardboard issue" - the official answers to 15.2 and 17.3 rely on cardboard necessarily comprising / being made of wood fibers, whereas we considered the term cardboard to be a generic term and cardboard comprising wood fibers only one of the possible cardboard types -as we indicated in the discussion to the blog-. I refer to the earlier discussion to our claims blog for all arguments in favour of either conclusion, which were all given in the earlier discussion between various candidates and between candidates and our team.

@ = Examimer's report answered F for 15.2 and T for 17.3 -- however, appeals based on opposite answers were successful, so our answers T and F are (also) correct [comment added on 8 May].

We will discuss the differences between the Exam Committee's answers and reasoning and ours tomorrow or early next week in more detail - please feel free to already post your comments now.

Best regards, hope all of you that had a serious preparation passed this Pre-Exam and can now start preparing to sit one or more of next year's main exam papers!

The document shows the results per EQEreg number and includes the following disclaimer:

From an analysis of the published results, we conclude:
Congratulations to all of you that passed!!!!

So, the pass rate is -as we expected in view of the increased difficulty level (see our "First impressions" blog)- considerable lower than in earlier years, where it was 88-90%.
(Whether there will be any corrections to the marks in view of the cardboard issue remains to be seen)

The score distribution is, in bin sizes of 5 marks and 1 marks: 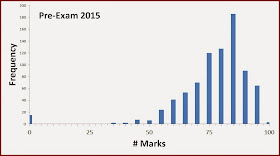 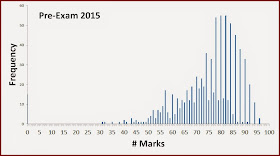 It is also interesting to see how the resitters have been doing this year:


The scores obtained by resitters in this Pre-Exam compare to the scores when they sat in 2014 as shown in the following figure: 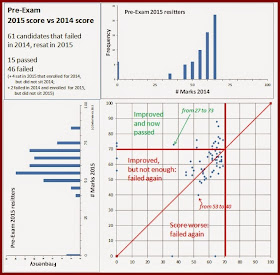 I consider the statistics quite alarming: the vast majority of the Pre-Exam candidates that failed in an earlier year, failed again this time!!!

One aim of failing an exam is to get a wake-up call and understanding that serious studying is needed. The high number of candidates failing again seems to indicate that they did not get this. Some may have failed the first or second time for other reasons, such as illness or nerves, but it seems unlikely that that holds for such a vast majority. Why do quite some candidates not improve? Did they study hard but anyhow failed again due to the increased difficulty level of this year (as indicated at least by the lower pass rate and the lower average score)? Or did they not study harder, and did they not recognize that they need to change their way of preparation and that they need to really start studying? Neither the EPC law, nor the PCT law, let alone their application to legal as well as claims analysis questions is such that you have any chance to pass by going to the Pre-Exam without a good preparation.And there is ample possibilities to prepare well: we provide good courses and good training material for candidates that do not have the level required for the Pre-Exam.
It was multiple resitters like these in the main exam that led to the introduction of the Pre-Exam!!!
And what I considers most alarmingly -and this may sound harsh...-: the resitters of 2014 are already active as trainee patent attorneys for three years or more, otherwise they could not sit the exam - or as examiners at the EPO for four or more!

The candidate that failed in 2013 and resat this year (skipped 2014), only improved his/her score from 40 to 59 - still quite far below 70. The other candidate that failed in 2013 did sit in 2014 where he or she with 89 marks: this shows that after a first  failure (which can happen to anyone, for whatever reason), taking the wakeup call serious and preparing well can thus lead to a huge improvement - it seems that this candidate decided to better be over-prepared for the Pre-Exam (looking into the future also for D, where your legal knowledge needs to be a further level up) than to just give it a try again!

As the Exam Committee indicated, the Pre-Exam is designed to give an incentive to let candidates start studying early, and with the intention to let candidates that are well-prepared (and well on track with their preparation for the main exam the year after) pass. You can study, practice and train all of this!
Roel van Woudenberg at 13:53
Share